The Battle of Bognor Bridge

Welcome to my narrative battle report. This was a Universal Battle campaign game played between myself and Sam Sowden Garcia. We had approx 3300 points each, Sam choose the scenario which was a Dominate, I choose to go first. 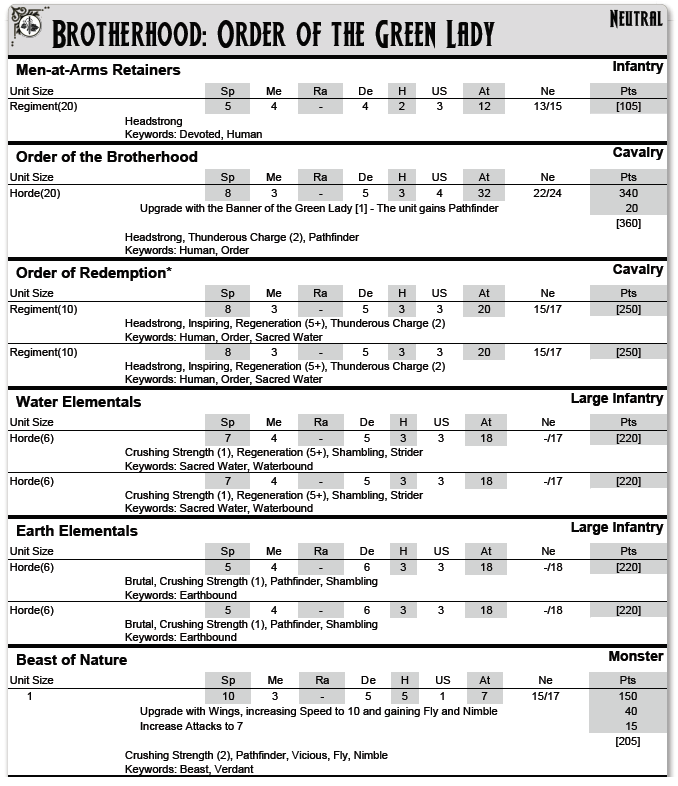 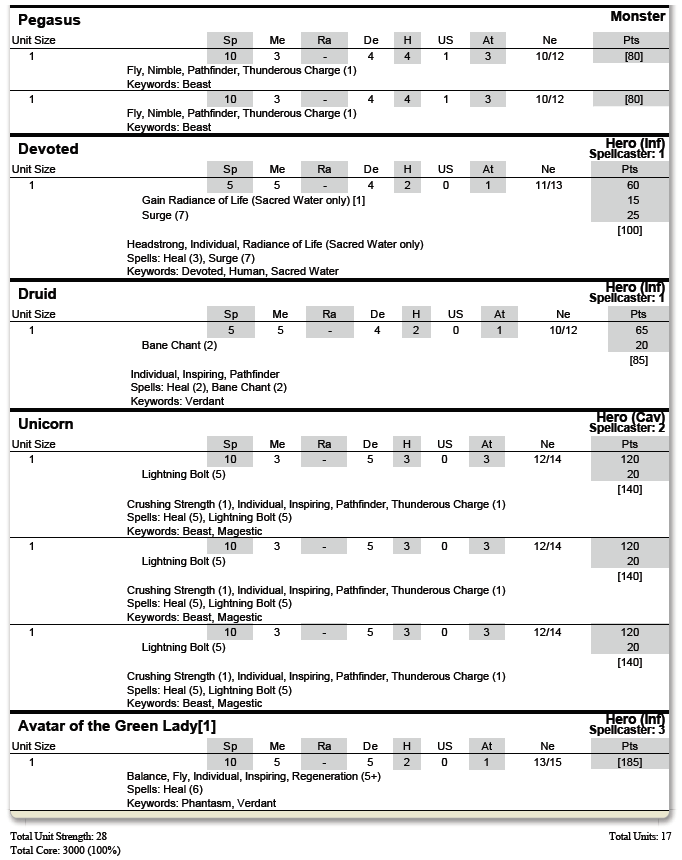 Plus his Campaign legendary king, These Kings have one upgraded stat of our choice and two artefacts. up to a limit of 320 points. 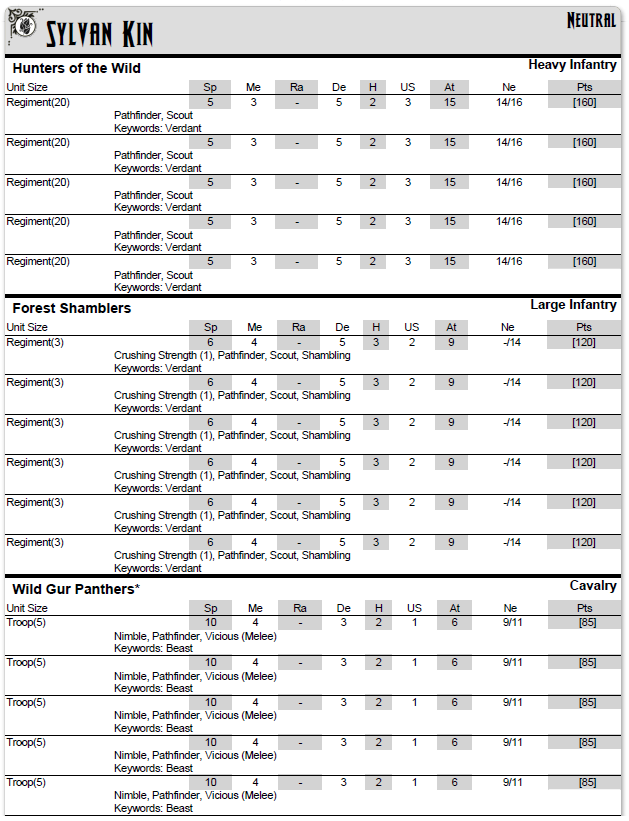 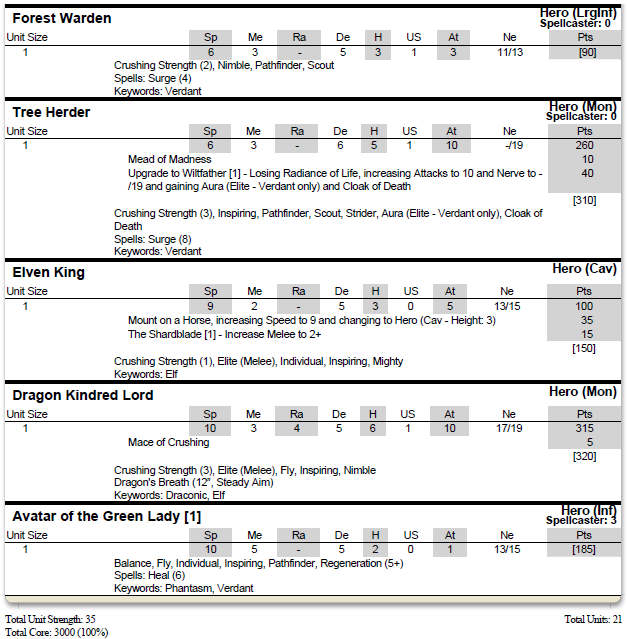 Barksain Boltstruck surveyed the land. He knew that foul enemies were all around him, planning to chop down the trees, kill the peaceful creatures that lived there, and pollute the land.

The Green Lady surely must not want this outcome, and he knew he had her favour as her Avatar had appeared to him to help defend the land!

Just then the Warden of the High forests Gnarlsly returned, bearing news from the scouts. "Sire!" She laboriously croaked, "It is worse than we thought." , "We are being invaded over the River Bognor by the old ones bridge!"

"Hmm" said Barksain slowly, a deep groaning vibration emanating from within him. "This is the point we must meet them and destroy their forces, we need that to hold that bridge to stop their invasion of the land". "But Sire!" said Gnarlsly, "The humans, they call themselves the Brotherhood of the Green Lady, and Sire...". "They also have a supposed Avatar of the Green Lady herself!".

"WHAT!" thundered Barksain, an electric spark crackling around his branches. "She must not be a true Avatar, unless" He finished thoughtfully... "The Lady wills us to leave this place?". Gnarlsly shifted nervously from trunk foot to foot, her roots trailing.

"We shall meet them in battle, and let the Lady herself decide." Barksain said with calm and measured groaning tones. "As she wills.", "Gather the banners, call our Elven allies."

Later that day the Brotherhood of the Green Lady and their numerous forces we're drawing close, their pennants and banners fluttering in the chill wind. The bridge had to be held. Barksains forces scouted ahead and at last minute bursted from the trees. Surprising the enemy and hurtling forwards with supernatural speed!

King Boltstruck had a cunning plan, using his Lady given agility, he sped forward and struck a Unicorn, before the Brotherhood could react! If the Lady willed, he would crush it, and with his momentum then strike the flank of the Water Elementals. His ally the Wiltfather charged the Elementals front simultaneously, his mysterious dark miasma oozed out towards the enemy, spreading decay into them, wherever it went.

Barksain Boltstruck hit hard and the Unicorn whinnied in terror! But then some mysterious force of will steadied him and Barksain was repulsed!

This was a terrible omen and the nearby Redemption Knights, despite being momentarily taken aback ,soon regain their composure and charged into Barksains flank. Near instantly, his animating lifeforce was deadened and that was the last he knew, bar one long thought. "Green Lady, why have you forsaken us?"

The Wiltfather on the other hand, knew much of death and loss, and despite Water Elementals surging into his flank, held on. The Sylvan Avatar of the Green Lady speed onwards and healed the Wiltfather somewhat, and together with flanking Tree Shamblers they managed to rout a Horde of Water Elementals, turning the ground into a messy muddy puddle. Perhaps her favour was returning?  No, it was not to be, like a tsunami the remaining Elementals swept onwards and the Wiltfather was knock prone uprooted and deadened on the cold ground, as his body began to sink into the mud.


The rest of the Sylvan army sped forwards, they knew they must keep the enemy away from the bridge, and despite the loss of their leaders so early the needed to hold!


The plucky Gur Panthers charged into the enemy all over the battle field, and somehow many of them kept the enemey occupied. The Earth Elementals and Knights seeming somewhat frightful of these large predatory cats. The Knights even wavered briefly and looked to be on the edge of fleeing! But they were too headstrong for that and seconds later, they rebounded into the fray.

On the other flank huge flying monstrosities including the Julius Anguita, the Red Redeemer on his flying Unicorn faced off briefly with the Elven Kings before running away, heading over the Sylvan forces in an aerial flyby display that beggared belief.

Elf King Mai-Ladieral, on the Great green Dragon, Lyffang, could see things going badly for his allies and knew the Treekin sorely needed help. He wished he'd been able to muster more of people, but only he and one other on the fastest Elven horse had, had the speed to get to the battle in time.

Spurring the great Lyffang on, he sped towards the flank of the great horde of Brotherhood Knights. Landing with devastating impetus he hewed them with his mighty enchanted Polearm, again and again! The Hunters and Shamblers also engaged the horde, but due to some unknown force they fared poorly and did not even scratch the Knights armour.

Due to this abysmal turn of events the Knights we're not killed and merely began to waver as like the other Order of Redemption. But... Again their headstrong nature swung them back into the action! They hit the Hunters with extreme anger and disintegrated their life energies with ease.

King Mai-Ladieral now had a choice, continue into the horde of Knights and finish them. Or a quick flight into the Flank of Order of Redemption. Deciding perhaps wrongly that the Horde was dealt with for now and blocked in place, they could be safely left,  the Dragon, Lyffang launched itself into the air! And then crashing down again into the Redemption Knights flank causing carnage! But once again some bizarre turn of events stopped them from fleeing and with insane courage the knights held on!

On the right, the Avatars of the Green Lady we're facing off, each hurling out green and black auras of arcane energy. Healing magic was bursting forth from the Unicorns and nothing was dying! But then eventually the Sylvan's magic faltered, the Lady favour turned towards the Brotherhood and the remaining Shamblers we're killed.

If they had only lasted one more turn, but alas it was not to be. This critical failure meant the Water elementals could direct their attention to the bridge.

The Red Redeemer on his winged unicorn had spent most of his time fighting Gur Panthers on the far flank but then as the day progressed,hurtled back to the centre and started dismembering Hunters of the Wild. Thing looked grim, and faced with mere Men at-Arms, the Elven King Mai-Ladieral decided it was time to leave and cowardly fled the battlefield! It was now the last stand of the Sylvans...

Until now the unobtrusive Forest Warden Gnarlsly had taken a back seat, but she could see surely all was lost, the enemy would surely capture her Liege and they would not willingly ransom him, this could not be allowed, she would give her life for him if need be. She saw a slim chance and took it.

The Red Redeemer had his back to Gnarlsly treating her with obvious disdain. Well she'd show him! With a cunning anger she sped into his rear and hit him with incredible force, and felled him. The Red Redeemer was down!

As thing stood, the day was nearly at an end. If the battle was decided now it would be a draw, but the Brotherhood made the choice to fight on just a little longer, disaster!

The final throws of the battle saw the loss of most of the remaining Sylvan forces. Gnarlsly was seen dragging away the body of the Red Redeemer, a handful of Forest shamblers and the Avatar of the green lady, also disappeared into the trees.

The Brotherhood of the Green Lady had won, but at great cost, both armies had been battered. Was this truly serving the Green Ladies will? In the coming days, their envoys met and the Kings were ransomed one for one. Perhaps this would bring a lasting peace between their kingdoms?


With the power of the Avatar, Barksain Boltstruck regained consciousness. With an instant clarity he knew his plan had failed utterly and worse still the inability to secure the bridge meant he had no safe route to his lands. Now a vast army stood between him and his home, and his forces we're sorely diminished. He'd had disturbing reports of an evil alliance of Orcs and an Empire of Dust invading his homeland, but what could he do? Plus what of the Green Lady, what plan did she have for him? A worried frown settled upon his great bark face.

"What will we do without your blessing my Lady?" he said to himself... Gnarlsly the plucky warden spoke up. "You will always have me sire". 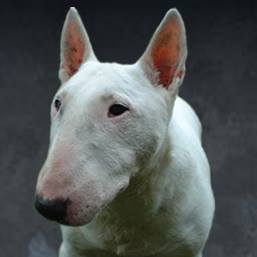