Herja of the Fallen

A friend of mine was asking for tips on how to use Herja to the best of her abilities, I wrote up some thoughts then decided I may as well publish them on my blog in case anyone else was interested! Now while these are Herja specific they will apply to a greater or lesser extent for a variety of other characters such as Basusu, Pharaoh with Wings, Vampires etc. So could be worth a look regardless. :)

Also don’t forget knowing how your opponent is likely to use a unit may well be key to neutralising said unit, if you can predict what it may do you can limit its options and perhaps catch and kill it. 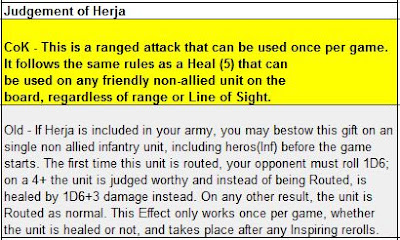 Tank – She can keep a normal unit of Infantry/Cav with CS busy all day long, between Def 6, Iron Resolve and Lifeleech she isn’t going to die… Now this isn’t something you are necessarily going to want to do with her all game long, but it can be just long enough to protect another unit from a flank etc.

War Engines/Characters – She is perfect for taking out War Engines, especially those without Individual! She will likely rout them in one turn. She will easily disorder characters so is ideal vs Flyers/Wizards as she will do at least one damage.  (likely 3 or 4+) That being said a Dragon will do some damage in return and may win the overall fight. So set up a trap In which you charge the grounded Dragon in the flank/rear the turn after.

Anything but? – She is very fast and can charge in any direction this allows you to add her in almost anywhere. Have a vague idea of what damage your units will do, doesn’t need to be perfect. If you see a combat and it’s not going to be a crushing win for you, consider sending Herja in too, the extra damage may be enough to swing the fight

Here’s a chart showing what damage she’ll do on average. Elite makes her quite reliable.

Survivable – She just won’t die unless? Generally don’t move her into a position where she can be charged by anything that can kill her! (CS2+ or the Hammer of Measured Force especially) Or at least ensure that anything that can do so will be hindered when it charges. (place her on the edge of a forest for example) If she does take a pounding, despite Iron Resolve run away!  Losing flight isn’t generally a big deal for her. (assuming CoK) And of course the best way to run away is actually to charge and kill something else, (Lifeleech!) this even allows you to go within 1” of other enemy units handy for escaping traps. She is ideal points denial.

Objectives? – Now the CoK pack limits this but certain tournaments (such as the recent Lonewolf) actually still allow individuals to score, this is huge! If she’s near the centre of the board at the end of the game she can fly nearly anywhere and possibly give you a win. Worth bearing in mind.

Even with CoK she can stand on Loot markers etc and be generally annoying. And of course she can certainly help kill things which are about to give you opponent a win.

Special – Now assuming CoK tweaks she has a Heal 5 she can use anywhere on the table, now you will mostly want to be charging with her, so I would probably use this turn 1 or two if anything you care about has taken at least 2 damage. If you save it, it probably won’t get used at all.

Alternatively if you’re playing her per the book then you just pick an infantry unit and hope to get lucky. It’s incredibly annoying on Thralls, chaff that just won’t die…

Well honestly she doesn’t really have that many, she is relatively expensive, but it’s points well spent. Her one downside really is she does only have 7 attacks where as a horde of Fallen for similar points has 18. Course she’s so flexible and hard to kill that she really is well worth her points!

Overall – Herja is an incredibly flexible unit that as you’ve probably seen almost every Varangrr player takes! Now oddly despite all that I don’t actually use her myself! Why? Well as much as I can see her utility I wanted another main hammer, and now I’ve felt the power of three hordes of Fallen I am loath to drop one! :p
Posted by Daniel King at 02:20