Altibash 2 –Too much of a good thing?

The second Altrincham tournie rolled around last Saturday, I’d had a great time at the first one and came 1st so was trying to repeat my performance here! I’ve recently tweaked my list, adding the 4th Beast pack troop, because they are always awesome and after Jez’s suggestion that I may have too many artefacts decided to drop a couple and give it a go. The main artefact I’d lost was the Brew of Strength on a Werewolf Horde, I really missed it!

CoK rules were in place and there was a charity reroll that allowed up to two dice from one roll to be rerolled once per game. 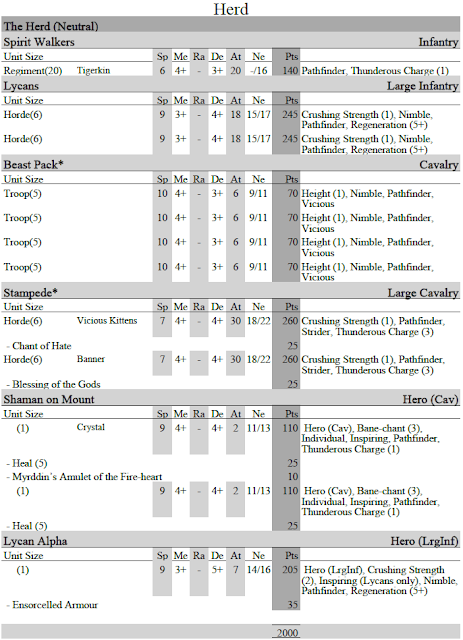 I’d been challenged by Walter, a friend of mine who recently got back into KoW, should be a nice easy start to the tournie right? WRONG! ;) 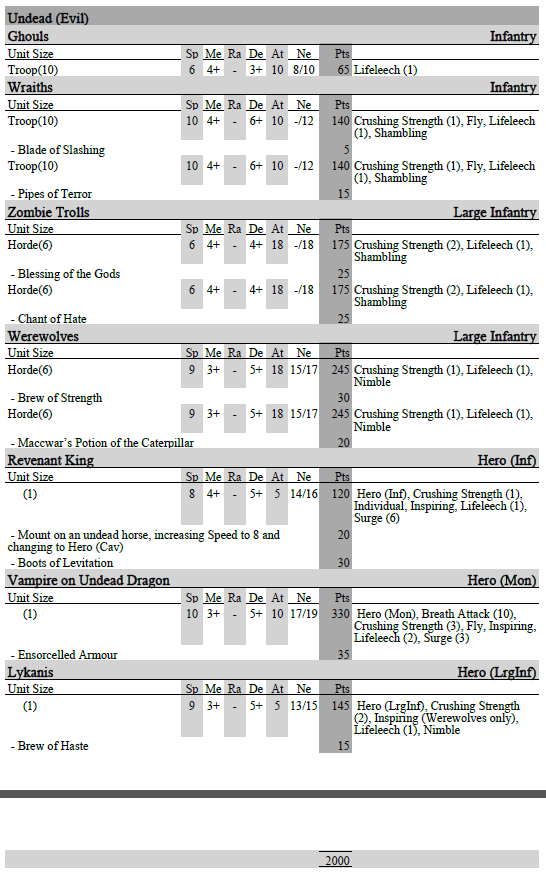 I went first and advanced my Lycan horde on the right hoping to draw out his Dragon and possibly some Wraiths, this worked allowing me to flank and destroy the Dragon and both Wraith Troops with a Stampede and the Lycans over a couple of turns. It should be noted my Stampede was badly positioned for flanking and I could only just see the Wraith troop, got to position better than that in future. Also I was lucky to hold, next time in the same situation the Lycans should be placed in range of one less Troops if possible.

On my left flank I was able to take out a Lycan Horde easily and block the other with a Beast pack. THEN I gave Walter the game… I was about to face some oncoming Zombie Trolls, when I said oh wait a minute your Werewolves can nimble charge past! Walters hadn’t seen this at all, if I kept quiet the game would have been very different… Oh well, so I faced the Werewolves allowing the Z Trolls a chance of a rear charge, needing 5 successes on 6 dice. Waltz rolls 4 successes, then uses the charity reroll to reroll 2 dice and get into the rear! NOOOOO!!!! This eventually saw the crumble of my entire flank…

At this point we had a flank each and we’re running out of turns. I saw that Waltz had positional advantage and if I advanced straight away would probably crumble my units, so I gambled on a 7th turn, which we didn’t get. Win to Walter, 15-5! He played well, shame I helped him too though! :p

Normally my army does quite well vs Dwarves, as they typically want you to stay far away and my army is quite fast, however it is also low defence so the shooting can get you if you aren’t quick enough. 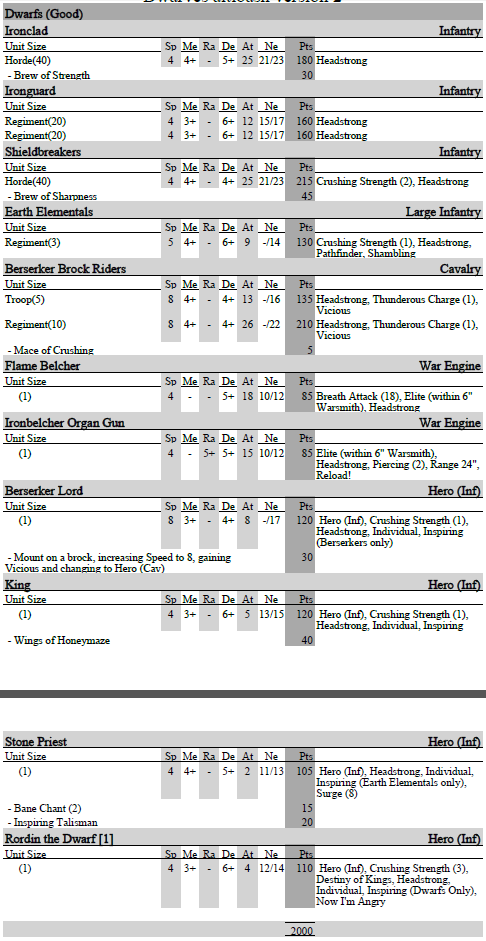 On my right Flank I set up my Beast packs to take the charge of Martin’s Brocks, they did this and then My Lycans and Stampede took the next turn or two routing everything. On the Left I got my Lycans around the flank and the Stampede into the front an Ironguard regiment, I then positioned my unit to force the Ironclad horde into difficult terrain, Martin cleverly used an Rordin the Dwarf to keep them out of it! The stampede took 12 damage and was Wavered. (bother) My Lycans then flanked the horde but only wavered them and Headstrong then allowed them to countercharge! The Lycans survived and took out the Warriors. The Banechanted Flame belcher took out my Shaman and then Rordin the Dwarf then took out my damaged Stampede with just 4 attacks! (losing Inspiring hurt) Rordin then kept the Lycans busy and nearly took them out too!

Now early on I had given both loot tokens to my Spirit Walkers and hidden them in the centre behind a hill, if I’d left them there I would have won the game, easy as that! However in a fit of insanity I decided to bring them out to help in the centre. BANG BANG BANG, went the Banechanted Flame belcher, and the Organ gun and routed them in one turn…

This was again right down the wire I’d lost a lot of my army but routed nearly everything too (over 1700 pts worth if I recall) if I could just get a turn 7 I would get the tokens back and win. Helpful Walter comes over and rolls a 3 for us… On the bright side it wasn’t a loss as my Lycans had hovered up the Dwarf Warriors token and we’re on Martin’s side of the table. He had two tokens on Elementals. Another game down to the 7th turn roll! (which if I’d played better ofc wouldn’t have mattered) This was a very close tactical game, which ended up a Draw, 12-8 to me.

Dave is a friend of Walters, and a really top bloke! He’s less experienced in KoW but has a beautiful army, I voted for him for best painted. He had lots of big cats in his army too, and they ended up clashing with mine with some amazing pussy on pussy action! 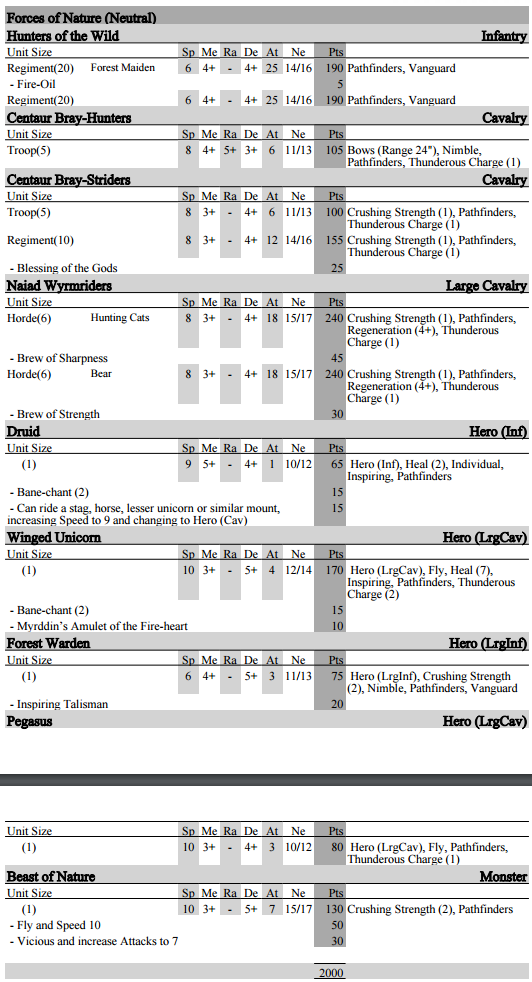 On the right flank I was able to use one beast pack to chaff up 3 of his units, on the left I did something similar, but using my Alpha to stop a unit of Wyrmriders too. (I got a lucky waver on them) This allowed me to fight them piecemeal, and when the dust cleared on turn 3 I had routed nearly everything, in the end I got all 2K and lost just the two Beast packs. For a 20-0 win.

I’ve played Eliot several times before and won every time, this time he wanted some payback! 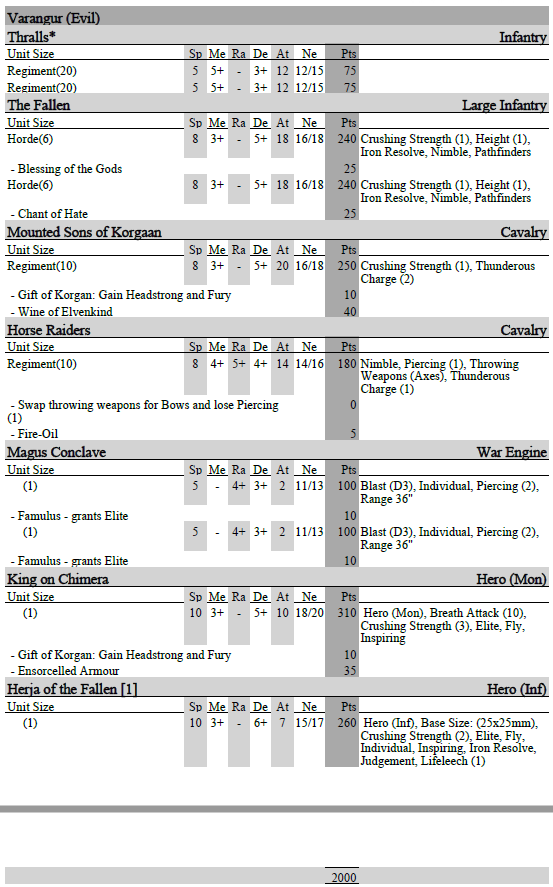 I won the roll for first turn and decided to go first after reading from his setup that Elliot was going to wait for me to come to him. (nothing was further than 8” forward) Straight off the bat I made a mistake which heavily contributed to my downfall... I threw a Beast pack forward into a wood with my Stampede right behind, they were engaged by Thralls who did one damage and then wavered them, as my stampede was so close it was completely stuck! I eventually maneuvered them past but it cost me several turns. Meanwhile my Lycans routed the Horse Raiders but got stuck on Herja…

On the other flank I was facing a Dragon and the Mounted Sons of Korgaan With my Alpha and my Lycans, I placed the Alpha into a wood knowing he should easily handle their combined charges. Elliot agreed and the Dragon flew off and hid,l the rest of his army also played non engagement and shooting. (sensible) The next turn I got the Alpha and Lycans into the Son, and got and got a Waver, excellent! Except they have Fury… Despite losing TC they then proceeded to rout the undamaged Lycans in one go! My Alpha then charged them again and did 1 damage… Next turn the undamaged Alpha was routed too! They rolled way over average both times, most unfortunate and it cost me the flank.

Meanwhile I finally pinned the Dragon down by charging it with a Beast pack and removing its flight, this forced it into charging my Stampede but allowed me to Counter charge it. Losing the TC was tough but Bane-chant helped. First round I did solid damage to the dragon but the 2nd was a terrible roll doing very little damage. I even tried using my charity dice but to no avail. The Nimble Sons having routed The Alpha and Lycans then came into the Stampedes flanking routing it too!

My other Lycans eventually got past Herja. (who flew off to pick on a Shaman instead) But they failed to rout a Thrall regiment in the flank due to Herja’s Judgement! ARGGGHHHH!!!

As the dust cleared, the damaged Thralls, the damaged Dragon and damaged Sons all limped across the line with some Fallen and the grinning Herja (Graah! :p)   Leaving my remaining units alone to pick on the Magus Conclaves… (who’d been shooting me all game) The last Conclave even managed to rout a damaged Stampede before the end! Big win to Elliot! He outplayed me, although if the sons hadn’t been so spectacular on the flank the whole game would have been different. (that and getting my own Stampede stuck, rookie mistake…)

One of the main issues was I had rebuilt my army to bring the extra chaff in, while this sounded like a good idea, I ended up getting stuck on it more than once. Going back down to 3 units seems wiser. And don’t get too close to them!

Secondly, deployment. I'd split my Stampedes up more in this build due to lack of inspiring for the 2nd Lycans, this didn't work very well being unable to support each other as needed. They need to go back to linking up again. This means the 2nd Lycan horde probably needs dropping.

Bring back the Brew of Strength of the Lycan Horde, without it they just don’t hit very hard.

I struggled versus mobile units and shooters, I would love something that can pick on them again, I miss the Centaur chieftain for this, will consider bringing one back.

Don’t be so gung ho! Vs Martin my unit with the tokens was safe behind that hill, even if nearly everything else had died I still would have won if I’d just left it there.

Just because you see a tactical option, you don’t have to tell you opponent! (telling Walter about the Nimble charge possibility was pretty stupid!)

Well they say you learn more from a loss than a win! Having come first at most of the events I’ve been at this year, a bottom half placing was certainly a wake up call! I had a great day, really enjoyed every game and Andrew and Kev did a great job with the event, and I look forward to the next one! 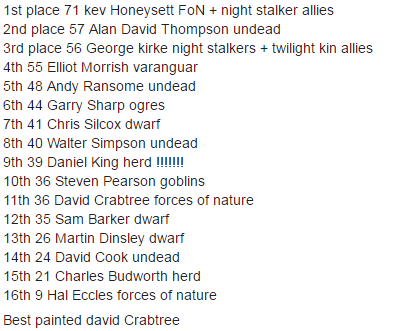 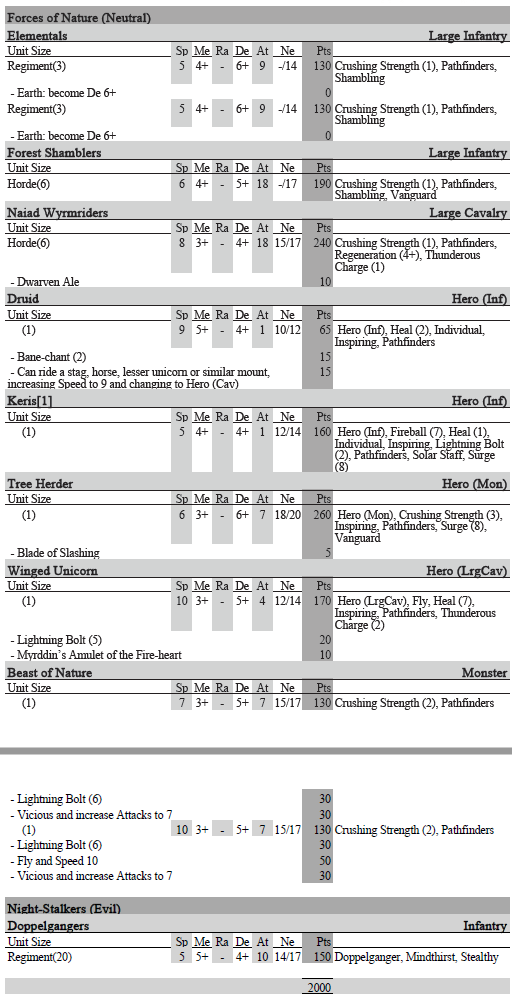 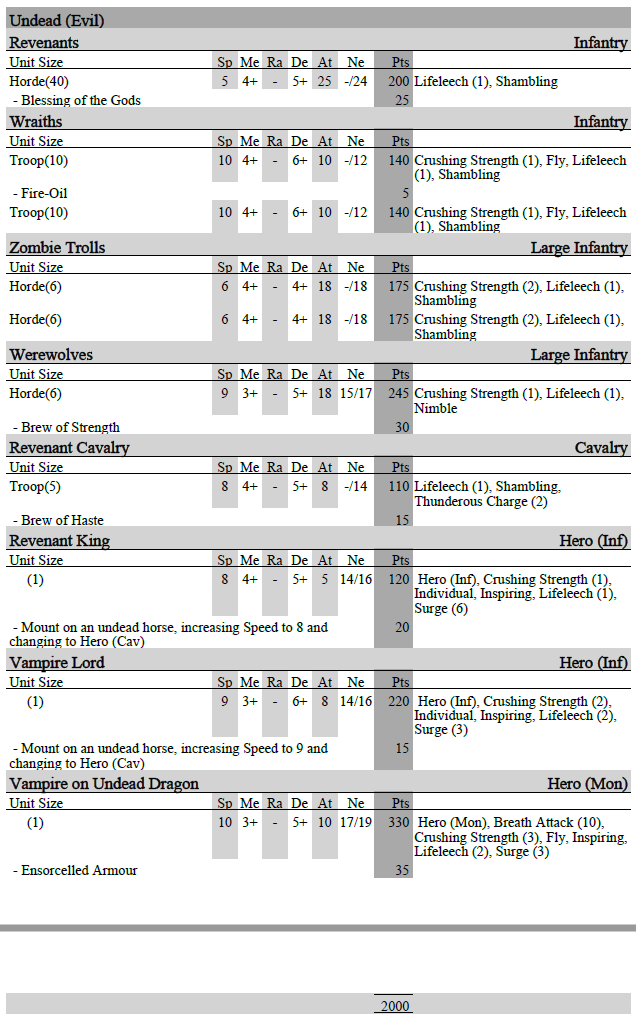 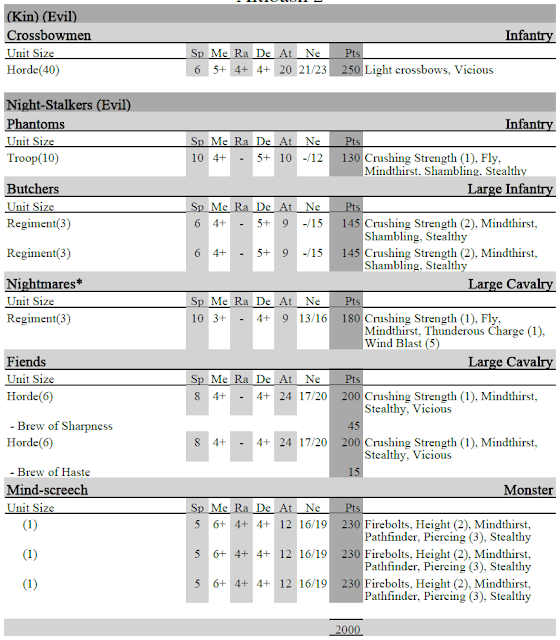 That it's for now, hope you enjoyed the report. :)